Gosh, Autumn seems like it was here and gone in a flash doesn’t it. Simon and Jackie were after an outdoor Autumnal photoshoot with their super cute little boy Mathias in time for Christmas.  The dark nights were drawing in fast, and with so few light hours left in a day, and the temperatures dropping, I was worried for a while there that we may not achieve our shoot before Winter was upon us.

Simon runs the ever popular FitMK (http://www.fitmk.com/), the original outdoor gym in Milton Keynes that offers a mixture of ways to train.  I’ve been attending FitMK sessions for the last 18 months or so, mostly doing bootcamps and my personal favourite class, Metabolic Effect. Anyone who meets Simon can’t help but be carried along by his enthusiasm for life, health, fitness and the great outdoors.

I was chuffed when Simon approached me at the end of a session to enquire about a family shoot. Knackered and looking shabby, covered in mud, and barely got my breath back, waiting for those precious endorphins to kick in, I just about managed to give him some details to make the booking.

Simon spoke to me about the photos he and Jackie have from their wedding in Canada a few years earlier.  They had the traditional ones taken indoors on the actual wedding day, but it wasn’t until the day after when they went outside, that they got some of their favourite images.  Those amazing Canadian backdrops with some super fresh snow, Simon spoke of how much he enjoyed the experience.  It makes sense that a guy who spends a fair chunk of his time outdoors, with his business being centred around getting active in the fresh air, would be well suited to an outdoor shoot.

Fastforward a couple of years and Jackie and Simon are now parents to the fabulous Mathias. Clearly a proud daddy, I’d heard so much about this little man already and felt really lucky to finally meet him.

We struck lucky on the weather, the sky was blue and clear with the sun shining bright in the sky.  I tend to allow a bit of extra time when shooting families with children in case feeding times, nappy changes or cuddles are needed, but Mathias was on top form.  Such a character, he pulled some cute facial expressions that had me seriously giggling when I was editing the images in the middle of the night.  And those blue eyes…. wow!

I totally love shooting outdoors in natural light, no two spots are the same and the light cannot be replicated.  Something about being outside and not stuck in one spot gives the photo shoot a relaxed and informal feel which means the time just flies by.  I enjoyed getting the opportunity to find out more about Jackie and her family.  It turns out we worked for the same company for a few years so there was lots for us to natter about.  A small world 🙂

Thank you for a lovely morning in the sunshine guys 🙂 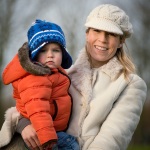